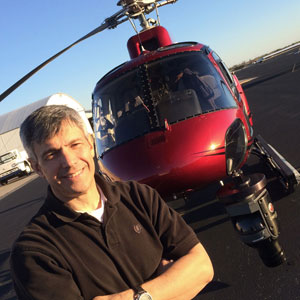 Flying Cross Aerial Productions is a Texas based aerial cinematography company offering both full size helicopter and small unmanned (drone) camera platforms, so we’ve got you covered no matter what your need. Our drone credits include motion picture, television commercial, reality TV, corporate and industrial projects. Operating under challenging conditions and deadline, we’ve always delivered. And with over thirty years’ production experience, we know what it takes to be successful.

Flying Cross founder Scott Hess has been involved in photography and aviation since 1978. As an aerial camera operator, he’s spent countless hours in helicopter platforms delivering live and taped footage for broadcast and corporate projects using a variety of camera systems such as Tyler, FLIR and Cineflex. Scott is also intimately familiar with live broadcast operations, having managed large multi camera productions with satellite and fiber connectivity. He was a news cameraman at CBS Boston for 16 years, then owner of a production/uplink company for 12 years, serving all the major US and foreign television news networks. He is also a Commercial Pilot/Instructor, and Aircraft Mechanic/IA.

We travel worldwide and are fully insured for all our UAV activity.